Vaccines are supposed to give a person immunity without causing illness. Any serious side-effects experienced at a large level make them pointless: the cure must never be worse than the disease. As of October 25, 2021, Taiwan has had 847 Covid deaths, but more than 865 vaccine deaths.

Pfizer, Moderna, AstraZeneca, and Johnson & Johnson are not your friends. In 2009, Pfizer paid the second largest healthcare fraud settlement in history, amounting at $2.3 billion, while Johnson & Johnson the third largest at $2.2 billion in 2013. AstraZeneca paid $520 million in a similar case. All of these companies were indicted for making kickbacks to advance their interests.

The following slide appeared for a split-second at a U. S. Food and Drug Administration conference in October 2020: 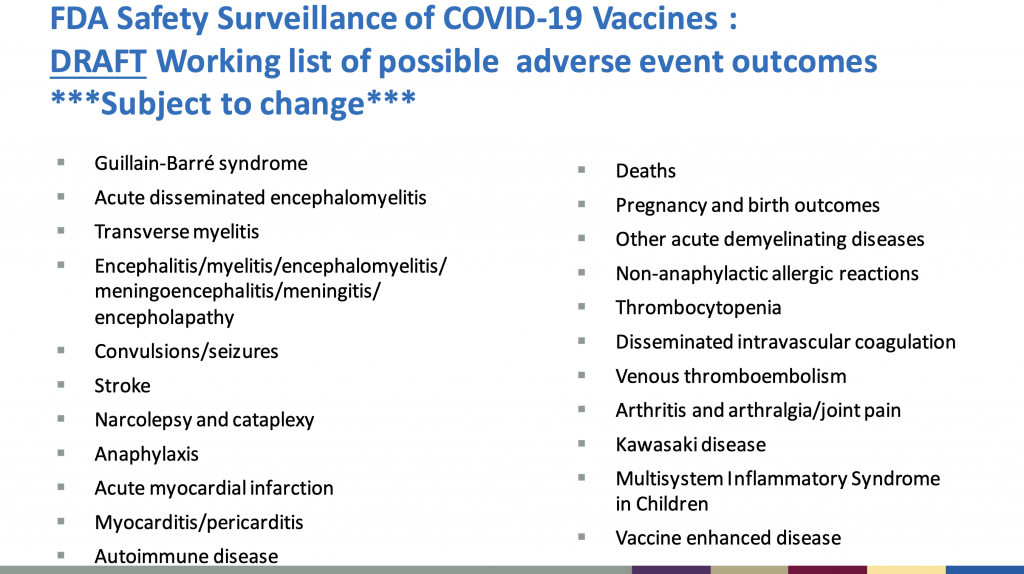 Let’s analyse a few of these side-effects.

Myocarditis. The UK’s Joint Committee on Vaccination and Immunisation has said that for a million double-vaccinated among those aged 12 to 15, there will be 15 to 51 myocarditis incidences, but only 2.54 fewer admissions to intensive care units. While an admission to the ICU is not a death, there is no such thing as light myocarditis—more than 50% of patients die within 5 years.

Given these statistics, I am disgusted by the FDA’s Eric Rubin declaring that the safety of the vaccine for 5–11 year olds (!) will be determined only once it is given to them:

Autoimmune disease. As crazy as it sounds, the AstraZeneca vaccine appears to weaken the natural immune response to Covid after just 4 months unless a booster is taken (see page 10 of a study conducted in Sweden). Vaccine surveillance reports by Public Health England also state that immune systems are weakened by Covid vaccines in the long run. This means that endless boosters will be necessary not only to fight off Covid, but to simply live.

I know a person who felt better than ever after receiving his Pfizer shot. I also saw a person collapse within quibis of vaccination. Using the same dosage for different body types may not be a smart idea.

As for the Russian Sputnik-V, it does not seem to be very effective against Delta. I personally know more people who caught Covid with Sputnik-V than those without it. This includes one person who was admitted to an ICU and nearly died with Covid just two months after his jab. The EpiVacCorona vaccine is a scam.

Covid deaths among the vaccinated should be considered vaccine deaths, as the vaccine did not do what it was supposed to. Severe post-vaccination adverse events are at record highs in the EU and in the USA.

The third phase of clinical trials for most vaccines won’t be over until late 2022. Anyone who takes a Covid vaccine today is participating in this third phase. Vaccine mandates and restrictions on the unvaccinated are unethical.

Governments often put optics above right decisions: appearing to be doing the right thing is more important to them than actually doing the right thing. The sunk-cost fallacy comes to mind here: declaring the vaccines faulty would end many bureaucrats’ careers, while locking down in 2021 is pure madness. As a result, for the first time ever, a medicine’s inefficacy is blamed on those who haven’t taken it, and a booster shot is now necessary to be considered fully vaccinated. This is because the original declarations of efficacy were completely wrong:

Fraudci in the Hall of the Mountain King

Governments might also be pushing mandates in return for certain officials receiving big bribes—don’t forget about the decade-old kickback settlements. In such a situation, pharma companies are incentivised not to end their failed experiment, but to make as much money as possible. The government is paying for the vaccines today, but I doubt it will continue to if infinite boosters become “necessary”. People must oppose vaccine passports to avoid their liberties being contingent on paying for a dangerous pharmaceutical product.

Quoting George Orwell, the war is not meant to be won, it is meant to be continuous. Big Pharma and governments are incentivised to have a never-ending, continuously shifting existential health crisis in order to amass wealth and expand emergency powers. Sadly, the price politicians and pharmaceutical executives pay for deception is far lower than their profits.

Contracts with pharmaceutical companies, such as the ones with Pfizer, state that the companies are not responsible for the consequences of vaccination. Here’s an excerpt from the Albanian one:

Purchaser hereby agrees to indemnify, defend and hold harmless Pfizer, BioNTech, each of their Affiliates ‹...› against any and all suits, claims, actions, demands, losses, damages, liabilities, settlements, penalties, fines, costs and expenses (including, without limitation, fees and other expenses of an investigation or litigation), whether sounding in contract, tort, intellectual property, or any other theory, and whether legal, statutory, equitable or otherwise arising out of, relating to, or resulting from the Vaccine.

To find out how safe the vaccine is, ask for life insurance before taking it.

What I’ve written is suppressed on Big Tech platforms and never talked about by mainstream media because they are all controlled by the same people who control Big Pharma—the investment firms Vanguard and BlackRock. In yet another conflict of interest, ex-FDA commissioner Scott Gottlieb is now a member of Pfizer’s board of directors. Exiting the filter bubble is essential to know the truth.

When those perceived as opposition start agreeing with a premise that one’s logical reasoning fails to reach, one begins to doubt his own sanity and usually gives in. This was demonstrated by Solomon Asch’s conformity experiment:

When a mindless crowd of non-player characters repeating the same thing aren’t enough to uphold the narrative, the evil mastermind brings in crisis actors and creates controlled opposition. Fox News criticises Xiden and wokeness, but will never talk about the results of the Arizona audits. (Its parent company NewsCorp is partially owned by Vanguard.)

Covid vaccines were given emergency use authorisation, which is legal only when there are no other cures. But there is a zinc-based treatment protocol that prevents the viral stew from replicating and kills it within 48 hours. In my personal experience, it worked exactly as promised.

Don’t allow others to make decisions about your body. It’s a dangerous precedent that bring us closer to forced kidney donations, abortions, and other experiments on our bodies “for the benefit of society”.

Deeply think for yourself before making any life- and body-altering decision. The erosion of freedom occurs only because we consent to it.

Very nice post. Not vaccinated yet. I’m not confident at all and don’t want to feed the adverse effects statistics. The French lab Valneva is currently testing a virus inactivated vaccine. I’ll maybe consider it, depending on the side effects / safety profile. But even with that one I’m not sure... It worries me, I’m at risk at work and I’m 46. Not the best combo...